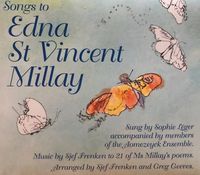 Come and celebrate the long awaited completion of an album featuring the poetry of Edna St Vincent Millay (1892-1950) - composed on piano by Sjef Frenken and sung by Sophie Léger.

Sjef is a well known and well liked singer-songwriter from Ottawa who has produced a number of albums and is also co-host of the Spirit of Rasputins Monday night open stage at Whispers Pub. Sophie is a singer-songwriter from Eastern-Ontario who moves audiences with her expressive and soulful voice. She has produced two albums (www.sophieleger.ca).

The night will showcase a selection of songs from the album as well as a number of standards and originals - accompanied by Nico Siemens on guitar.

A light snacks will be provided between sets.